Winner of the Parliamentary Jazz Award for Best Media, 2019

Beast from the East 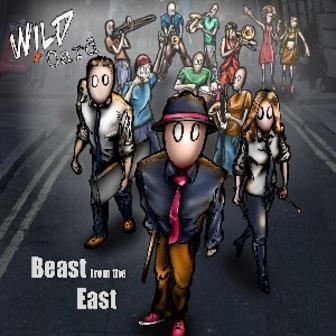 Yes, Wild Card are a party band but there’s also an intelligence and sophistication about their music. Beast from the East, with its increasing focus on original material, is arguably their best yet.

“Beast from the East”

“Beast from the East” is the fifth album release by the London based trio Wild Card, led by the French born guitarist and composer Clement Regert.

The group’s 2008 début “Mixicity” featured a different quartet line up but the above trio has been in place for the albums “Everything Changes” (2012), “Organic Riot” (2015) and “Life Stories” (2018). The three recordings by the current trio have all been reviewed elsewhere on the Jazzmann.

Regert has always supplemented the core trio with guest instrumentalists and vocalists, both on record and in the live environment. I’ve always enjoyed the group’s records with their infectious mix of jazz, funk and soul but have always considered their true home to be the live environment.

Wild Card have been a popular attraction on the London jazz circuit for many years and I finally caught up with them at the 2019 EFG London Jazz Festival when the band played an exciting show in the hot and sweaty environs of the Spice of Life venue in Soho. Here the core trio of Regert, Alloway and Noble was augmented by the powerful horn soloists Roberto Manzin (alto sax) and Rosie Turton (trombone). There were also a number of vocal items featuring the singing of Brazilian born guest vocalist Lune Cohen. It was a hugely enjoyable event and I was pleased to be able to see the band live at last after having covered them regularly on disc.

The London performance featured a considerable amount of material from the then forthcoming album “Beast from the East”, which was officially released on February 7th 2020 and launched at the 606 Jazz Club in Chelsea.

The new album was recorded ‘live in the studio’ at three separate sessions and features a lengthy and very illustrious list of guest performers, the roll call being as follows;

As can be seen from the above list Wild Card collaborate with the cream of the British jazz scene and many of these musicians have appeared on previous Wild Card recordings and performed with the group on the bandstand.
The new album is book-ended by a couple of covers but nine of the album’s eleven tracks were written by Regert, with the trio’s leader continuing to put the emphasis on original material.

The intriguingly titled “The Saga of Harrison Crabfeathers” was written by the American pianist and composer Steve Kuhn. Regert’s adaptation of the song commences with the sounds of his acoustic classical guitar and the wistful vocal of guest singer Emilia Martensson. Subsequently the music gathers greater momentum and energy, subtly driven by Alloway’s flexible drum grooves. Guest musicians Turton and Caetano make significant contributions but the featured instrumental soloist is Eagles who combines a warm tone with great fluency and inventiveness. Meanwhile Martensson’s singing takes on a greater stridency and soulfulness as she really begins to soar.

The title track features a rocky, shuffling groove with Noble’s Hammond prominent in the arrangement. The featured soloists are saxophonist Tim Garland and trombonist Barnaby Dickinson who exchange ideas in thrilling fashion, with Graeme Flowers also also adding his fiery
but graceful trumpet lines to the debate. Garland is imperious form here and the presence of such a well respected and high profile musician on this session represents something of a coup for Regert and his colleagues. Indeed the leader celebrates by cutting loose in rousing fashion on electric guitar in the tune’s closing stages.

“Tales from Hanoi” proves to be a lively and infectious Latin style romp featuring a punchy horn chart with Turton and Eagles both contributing.  Noble weighs in with a hard grooving Hammond solo and there’s another fluent trumpet statement from Flowers. Towards the close Alloway and Caetano, both busy presences throughout, get to enjoy an effervescent drum and percussion feature.

Wild Card may be an exuberant live act but they are also a band with a social conscience. “Black Tower”is dedicated “in memory of the Grenfell Tower tragedy”. Featuring Regert on acoustic guitar it’s still a hard hitting piece of music in which the leader shares soloing duties with Garland’s eloquent tenor sax. There’s also a drum feature for the impressive Alloway

“Do It Like A Girl” features the distinctive sound of guest musician Adam Glasser’s chromatic harmonica alongside Regert’s cleanly picked acoustic guitar in a gently uplifting arrangement that also includes contributions from alto saxophonist Jim Knight and percussionist Will Fry.

The rousing jazz waltz “Doctor K” was played at ‘The Spice’ and there, as here, it featured the trombone soloing of Rosie Turton, also a member of the group Nerija and a bandleader in her own right. Regert also features strongly on acoustic guitar, his solo sounding almost oud like here. Regert favours acoustic guitars made by the Swiss company Godin, the same brand endorsed by fellow guitarist Nicolas Meier.

“The Struggle” introduces the powerful neo-soul vocals of guest singer Imaani (of the group Incognito), the lyrics a rousing call to action in the face of adversity. Buoyed by a propulsive groove the piece also features the incisive tenor sax soloing of Garland, who stretches out in highly effective fashion. Imaani returns to sing with even great power while Flowers’ trumpet blazes briefly.

The curiously titled “Asparagus Moment II” features Regert on electric guitar and finds him coaxing an intriguing and quirky array of sounds from the instrument and really cranking up the volume during his exchanges with Noble. Alto saxophonist Jim Knight maintains the intensity with a wailing solo and Will Fry’s relentless percussive barrage, in tandem with Alloway at the kit,  is a constant factor throughout.

“Screen Walkers” adopts more of a conventional swing feel and finds Noble erupting with a blazing Hammond solo in the manner of classic jazz organ soloists such as Jimmy Smith. Also featuring strongly is trombonist Barnaby Dickinson, who cuts loose with some of his most unfettered playing of the set as he exchanges phrases with the fiery Flowers.

The final piece, a ska and reggae inflected take on the old Temptations’ “Papa was a Rolling Stone”, is listed as a ‘bonus track’ . Nevertheless it’s a great, high energy way to go out with trombonist Alistair White doing his best Rico impression and Denys Baptiste muscling in on tenor.

“Beast from the East” is unmistakably a jazz album but like all Wild Card’s releases it touches many other stylistic bases too; funk, soul, Latin, African and now Jamaican. All these influences come together in the now familiar Wild Card house style and somehow it all makes perfect sense.

Yes, Wild Card are a party band but there’s also an intelligence and sophistication about their music.  Regert’s compositions are finely honed and crafted and make excellent vehicles for the trio’s illustrious range of guest soloists.

The core trio are consistently excellent and remain at the heart of the music throughout, but they are all also excellent team players who allow the guest performers room to shine – and shine they do.

Having at long last seen Wild Card perform live their recordings begin make even more sense and “Beast from the East”, with its increasing focus on original material, is arguably their best yet. Wild Card seem set to thrill London jazz audiences for many years to come.