Winner of the Parliamentary Jazz Award for Best Media, 2019 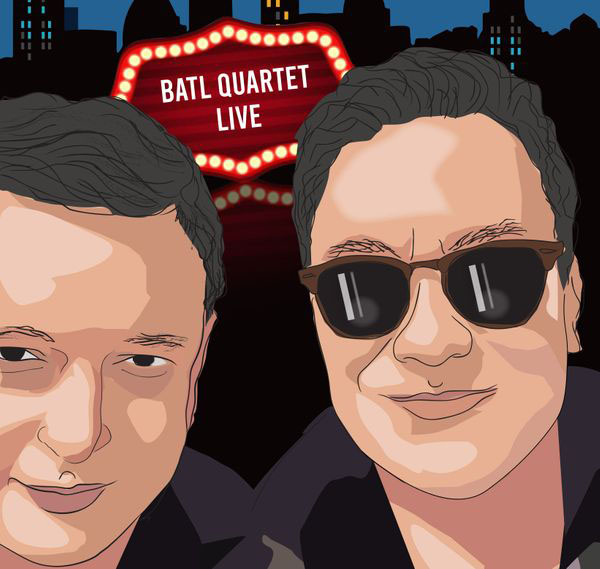 BATL Quartet is a relatively new group founded and co-led by two stalwarts of the UK jazz scene, saxophonist Brandon Allen and pianist Tim Lapthorn, both bandleaders in their own right.

Allen and Lapthorn have played together in various aggregations for over seventeen years, often in various quartet formations as part of the Ronnie Scott’s house band. As Allen’s liner notes make clear he obviously has a great respect for Lapthorn’s musicianship and in 2018 the decision was made for the pair to form a regular working band.

BATL Quartet puts the emphasis on the pair’s original compositions, although live performances can also include the occasional standard, often by composers such as John Coltrane and Antonio Carlos Jobim. Allen cites these two as key influences on the quartet, alongside Stan Getz, Chick Corea,  Bill Evans, Wayne Shorter, Weather Report and Brazilian music in general.

It was originally intended that the quartet would tour intensively and then cut a studio album. 2019 has seen the group touring widely and their performance in March at the Pizza Express Jazz Club in Soho, London was documented by the Club’s in house engineer Luc Saint Martin. The quality of the performance and the musical chemistry between the performers, particularly the two co-leaders, forced a rethink, and the decision to make BATL Quartet’s début release a live album.

My review of the quartet’s performance at The Hive Music and Media Centre in Shrewsbury, with Tom Thornton on bass and Dave Ingamells at the drums, can be read here;
http://www.thejazzmann.com/reviews/review/brandon-allen-tim-lapthorn-quartet-the-hive-music-media-centre-shrewsbury-1/

“BATL Quartet Live” features many of the pieces that were played at Shrewsbury and the recording focusses on the original writing of Allen and Lapthorn exclusively. The compositions are firmly within the jazz tradition, drawing on swing and bebop and those previously detailed influences. The composers also draw inspiration from more contemporary jazz influences, and from their personal life experiences.

The album commences with Allen’s “Gone But Not Forgotten”, a piece dedicated to the memory of
Graham Wood, the late Australian pianist who was something of a mentor to the young Allen.  Wood was the founder of Perth Jazz and the first head of the jazz department at the Western Australian Academy of the Performing Arts in Allen’s native city of Perth. The recording itself is also dedicated to Wood’s memory.
Musically the piece exhibits a melodic urgency and has something of the feel of a hard bop standard about it. It commences in piano trio mode, with Lapthorn at the keyboard above a crisp bass and drum groove. Allen, on tenor, makes the occasional interjection but when his turn comes to solo he does so with power and authority, making effective use of his instrument’s upper registers. Elsewhere Lapthorn makes effective use of the Pizza’s Steinway with his fluent and inventive soloing, prompted by Haines’ neatly energetic drumming. The rhythm section also feature as soloists with an enjoyably melodic excursion from Somogyi and a concise but vigorous cameo from the effervescent Haines.

Also written by Allen “Lazy Days”, inspired by the arrival of summer,  develops out of Haines’ marching rhythms and takes its musical inspiration from the swing era with Allen generating a suitably warm and rounded sound on tenor. One of Allen’s previous projects has seen him updating the repertoire of the late American saxophonist Gene Ammons, and there’s something of Ammons in his sound here as he stretches out effectively. Lapthorn follows with a wryly witty solo that deservedly wins the approval of the knowledgeable Pizza audience.

Lapthorn makes his compositional bow with “Return To Life”, which embraces a more contemporary jazz feel. The composer takes the first solo, lithely dancing above the subtly propulsive bass and drum grooves. Allen then weighs in on incisive, but fluent, tenor, this followed by another melodic outing for Somogyi at the bass.

Allen’s speaking voice is heard as he introduces a second Lapthorn composition, the Ellington inspired ballad “Cuckoo”.  The piece is ushered in by a lyrical passage of unaccompanied piano before Allen takes up his tenor to demonstrate his skills as a balladeer. The saxophonist’s tone is warm, round and breathy, emotive, but still quietly authoritative. Lapthorn’s thoughtful piano solo follows, sympathetically supported by double bass and delicately brushed drums.  Following further melodic ruminations from Allen we hear Somogyi at his most lyrical on the bass with a perfectly paced solo, spacious but infused with a deep resonance.

Allen’s “Running Away With Me” lifts the tempo once more on a piece drawing inspiration from the works of Stan Getz, Bill Evans and Chick Corea, particularly the latter’s composition “Captain Marvel”. The BATL Quartet deliver a breezy, Latin tinged performance, galloping through Allen’s composition with great élan as the composer’s tenor swoops and soars, spurred on by Haines’ dynamic drumming. The youngest member of the group, Haines is a product of the Royal Welsh College of Music & Drama in Cardiff but is now based in London. He acquits himself superbly throughout the album, playing with great power or with great sensitivity as required. Following Lapthorn’s solo Haines gets to enjoy his own feature, a dynamic drum solo that elicits whoops of approval from the audience.

Allen announces his own composition “Theodore”, a dedication to his infant son. Relaxed but playful this mid tempo tune is another that has something of the feel of jazz standard about it. Allen’s tone on tenor is appropriately warm while Lapthorn’s quotes during an expansive and brilliantly constructed solo are suitably impish. The composer subsequently stretches out more incisively on tenor, followed by the consistently impressive Somogyi at the bass.

At Shrewsbury Allen informed us that his jazz waltz “A Little Love Song” had been inspired by Weather Report. “I hope we sound like an acoustic version of that band” he declared. A delightful ballad style performance embraces many twists and turns and includes eloquent solos from Somogyi, Allen and Lapthorn.

The closing tune is “Frack The Right”, the title reflecting Allen’s environmental and political concerns. This is a fourteen minute tour-de-force that sees the composer adopting a harder edged tone on tenor as he channels his inner Coltrane during a barnstorming solo that sees Lapthorn, Somogyi and Haines filling the roles of Tyner, Garrison and Jones. Lapthorn’s own solo is similarly feverish and inventive and there’s another dynamic feature from young drum tyro Haines. BATL Quartet really tear things up here on a rousing group performance that gives full expression to Allen’s dissatisfaction with the current political climate. The album concludes with his acknowledgement of his fellow musicians and the cheers of the Pizza audience.

“BATL Quartet Live” is an excellent document of the group in live performance, the spontaneous nature of the event imparting the music with a vital edge that might have been lost in a studio situation. Allen concedes that live recordings can sometimes be a bit of a risk, but the ‘warts and all’ approach does nothing to harm anyone’s reputation. Allen and Lapthorn both play with power and conviction, their solos fluent and consistently imaginative. The experienced Somogyi is a steadying and commanding presence at the bass and weighs in with his fair share of convincing solos.

On a personal note I’m most excited by the performance of Lloyd Haines, a musician whose progress I have monitored since his days as a student at the RWCMD. It’s good to see him making his mark on the London music scene and his contribution to the success of this recording is immense. As I observed previously his playing is exceptional throughout the album.

The presence of the regular team plus the availability of a grand piano ensures that the recording is a notch above the Shrewsbury performance and the album as a whole represents very enjoyable listening.

Indeed the playing of all four musicians is of the highest standard. If there’s a criticism of BATL Quartet it’s that the writing is a little too generic, but even so Allen’s optimism about the creative potential of this ensemble is still very much justified.